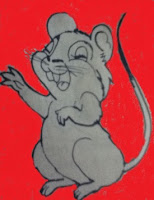 A Haitian family had a “restavék” who never seemed to find time to do the dishes after dinner.  She always piled up dirty dishes under her mistress’ living room table overnight to wash the next morning.  The dirty dishes attracted a clever mouse named Mélen to the house.  Melen loved feasting on food scraps, so he decided to settle in a hole behind the living room wall of the family’s kounouk (shanty house).

Every day at dusk, Melen would leave his cozy hole to forage for food. Cautious, he would stand in front of his hole before venturing out.  He would look around and say, “I like living here!”  What he really loved was that the roof of the Kounouk was freshly topped with green vetiver ( vetiver: roofing grass) that river rocks wall that kept the kounouk cool (natural building material keep Haitian houses cool) in the sweltering rainforest heat.  And, of course, there was the abundance of food scraps….

The family living in the kounouk spent their days in the field working the land.  They left before dawn, and came home after dark.  Happy to be home each evening, they would sing and dance around a campfire while the village elder would tell stories to the very young.

At the end of the night, the parents would choke the fire with sand and water then carry the youngsters to their beds.  The flickering light of a lamp tèt gridap (kerosene lamp) would dimly light the kounouk bedroom, signaling that the family was minutes from going to sleep.
Only then would Melen the Mouse venture to the living space  After quick looks to the left and right, “safe” he would dash toward the living room table and it’s bounty of food scraps.

Stealthy he would inch toward a big cooking kettle filled with wooden spoons and the remnants of the family’s meal.  When he reached it, he would dive in and eat to his heart’s content.  When his tummy reached full capacity, he would clumsily climb out of the kettle using the spoons as a stepladder.  Like a tafiate (drunkard), he would then stumble into his hole for a great night sleep.

After a while, Melen the mouse became so comfortable in his routine that he rarely checked for dangers anymore.  He was too clever to get caught.

One day, Melen returned to the kettle while the family was outside chanting and playing “balance Yaya”.  He ran towards the table and dove headfirst into the kettle with a splash.  However, this time the kettle was not filled with the leftovers he’d expected; it was filled Tafia - a cheap homemade Haitian moonshine liquor.  The family had made it to serve in a Konbit (konbit means free community labor. It is when neighbors get together to help one onother) the next morning.
Melen thoughts, “Man!  How am I going to get out of this mess?  There is no spoon to climb out!  I am toast.”
Unable to climb out, he decided to test the Tafia.  “Yuck, this tastes like gasoline.  Why do humans drink this stuff?”
Melen began swimming in circles trying to get out.  When he realized he would never make it on his own, and decided to conserve energy for a while floating idly on his back and contemplating a means of escape.

“Maybe I can drink my way out…,” he thought.  Glut, glut, he swallowed.  But after a few sips he felt woozy, deciding this approach was not going to work.
He’d been floating there a few minutes when he heard footsteps.  A black and grey cat poked his head in the kettle and asked, “What are you doing in my master’s Tafia?”
“Your master’s Tafia…!  Who are you?”
“I am Theodor.  Who are you?  ”
“Call me Melen the Mouse.  ‘Melen’ because I am a sly one.” he whispered.  “It is nice to meet you Theodor.  Can I call you Theo?”
“Sure…”
“Theo, can you please give me a hand out of here?”
“What’s in it for me?”
“Why, mousse pause,  a free snack of course.  If you pull me out I will let you eat me!”
“Deal” said the cat, and lowered his tail into the kettle so the mouse could climb out.  As soon as he got out, he dashed for his hole and began laughing.
“Phew, I thought I was a goner for a moment there Theo”
“What do you mean?” yowled Theodor.  “What about our deal?”
“What deal?
Melen knew exactly what Theodor was getting at, but he began laughing hysterically.
“You believed me!  Ha, ha you really did!  I was drunk when I made that promise, Dude!  Didn’t your mama tell you to never to trust the promise of a drunk!  Seriously Theo…!”
Theodor the cat was angry with Melen the mouse.
“B- b- but you promised!”
“Ye-ah…and I was drunk!”

Theo never trusted a mouse again.  Every time he saw Melen, he chased after him.
Theodor the cat told his children how the mouse duped him; he was a little bit embarrassed telling the story.  “Mice are not to be trusted,” he told them.

Theo’s descendants passed the tale of the mouse’s betrayal to their heirs from one generation to the next.  “Cats and Mice and are never to be true friends.  It’s Cats and Mice Law.”  That is why cats hate mice.
at March 28, 2012 No comments:

Sit & Stay a while