Good morning Monday
How are you Tuesday
And you sir Wednesday
How’s the family. Thursday
If you see Saturday
Tell her I’ll be waiting for her
In Sunday’s living room 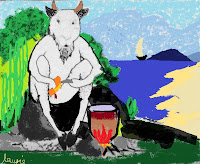 Once upon time, a Goat decided to go fishing in the sea. Before he got in his little sailboat, he gathered up some sweet potatoes, a large tin can and some spices.  He looked the sky to check if it was going to rain.
He winkled his nose and said to himself, “We’re going to have a nice day; clear skies and not a trace of a rain cloud.”  He then checked his bag one last time to make sure he wasn’t missing anything:
•     Bait? Check
•     Food? Check
•     Fishing Pole? check
•     Sailboat? Double check
Goat then boarded his skiff and shoved off.

He paddled along for a while, studying the wave patterns and navigating his way through the troughs between the swells.  Once he was a way out from shore, the seas calmed and he soon found a spot suitable to cast his line.  But the morning sun was hot and the fish appeared to be lingering in the cool of the cobalt depths, as the line never tugged.  Around noon, Goat picked up his bamboo pole, gave it a yank, and reeled in his line.  Nothing… but the worms were gone.

Goat’s tummy reminded him that, catch or no catch, it was time for lunch.  He paddled back to shore, pulled his skiff up on the sand and set up camp under a coconut tree.  He then proceeded to forage through his basket for vittles he would use in making himself a tasty lunch. He gathered up some firewood and lit a fire.  Just then a stealthy auburn Fox crept up and panted menacingly, “Goat what are you doing in my territory?”

“I was about to make lunch, Sir Fox.  Delectable boiled sweet potatoes with legumes.”
“Yuck!  Legumes and vegetable gives me indigestion, I would love some meat, real tasty meat if you have some. Wait a minute…  I’ll tell you what, Goat, finish making your lunch, eat it, and then I will eat you.   Hurry up, I am starving!

“I never hurry when I make lunch,” Goat replied. “I need to cook my sweet potatoes thoroughly.  If I don’t, it is I who will have indigestion.”
“Okay, don’t take too long!”

Goat blew on the fire ardently; he was so engrossed in his task he did not notice the rustling from a nearby bush.  This time a hulking Wolf emerged.  He sniffed the air impatiently and growled, “What is going on here?”
Goat replied, “I was making lunch when Sir Fox showed up.  He asked me to eat my lunch, so I can be his lunch. And he said to do it fast.”

“Is that right?” huffed Wolf.  “Well, in that case, Goat, hurry up and finish making lunch, then eat it so Fox can eat you and then I can eat Fox”

The potatoes were already over- cooked, but Goat refused to eat.  He knew that the moment he reported the food was prepared the real feasting would begin, with his own tender hide as the second course on the menu.

Just as Goat began to feel he could delay the banquet no longer, a monstrous Tiger with cruel sapphire eyes sprang out from the long grass bordering the clearing.  He curled back his upper lip in a long toothed snarl and demanded to know the purpose of the little gathering.  Goat explained that he was making lunch and that Fox was going to eat him and then Wolf was going to eat Fox.  The Tiger chuckled and gave his blessing with the condition that Wolf would become his dinner at the culmination of the feast.

Increasingly uneasy with the direction the events were taking, both Fox and Wolf curled up into a corner.  They wanted to run away, but feared they would they make it far as Tiger is so much faster than they were, so they waited their fate. They were both calculating how they would get out alive of this conundrum.

“I wish I was kinder to Goat… Fox sighted.”
“Why did I have to fallow you Fox, I would be in this pickle right now. Tiger drooled wolf noticed, “I bit he is thinking of how tasty I am.”

Goat too was thinking of a way to get out of the mess Fox created when he suddenly got an idea. So he got up and told the predators “I am going to get more firewood.” Then he left. Tiger squinted his eye and was about to bounce on Goat if he tried to escape.  But he got distracted by the sound of Goat hooves was making.

“Goat, why are your feet making  funny  sounds?”
“I am wearing my shoes… Goat replied hesitantly.”
“Shoes huh, show them to me? Goat swallowed hard then showed Tiger his hooves.
“Nice shoes you got there Goat, can you make me a few pairs?”
“I would love too but I do not have any material.”
“What do you need?
“Well…. Goat replied with a sly grin, “Fox skin makes the shoe’s quarter vamp and tongues so strong and ductile.  But really Wolves skin make a sturdy sole and toecaps, when sewn together and dried in the sun, the quarter, vamp and tongue remained malleable, while the  sole and toecap became rigid and make that cool noise when you walk on them.

When Fox and Wolf heard this, they run away as fast as their legs could carry them. Tiger tore after them to take their hide for the new shoes he now coveted. In the chaos, no one notice that Goat slipping back to his boat and quietly shoving off into the safety of the sea.

While he was leaving, Goat called back to the frenzied chase on shore “Piman bon nan tet tako li pa bon nan tet ti poul!”  This Haitian adage means be kind to other and the world will be kind to you.  Since that day when Goat life is in peril he always run for the rocky mountain as he know few other animals are able to climb on rocks as he can as they do not have equate rock climbing shoes. Phew thank goodness I was able to think on my feet!
at December 04, 2011 No comments:

Sit & Stay a while